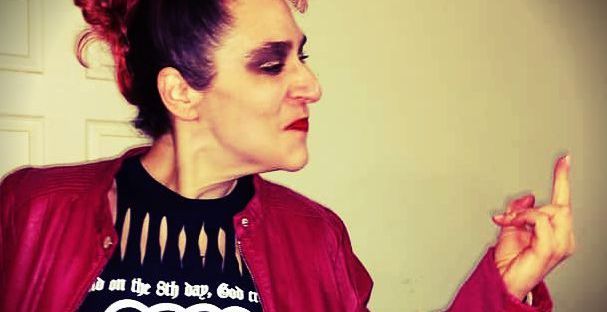 (Design Commentary: I’m going to be putting up character fiction pieces on this blog with brief introductions of what is meant to be explored in the piece. While I use fiction as a method of debriefing, it’s generally an exploration in character psychology and building. The character contained here is an attempt to walk the fine line of someone who is psychologically, emotionally manic at nearly all points in time and the various coping mechanisms that would be used to survive in such a state. This piece is a brief glimpse into what is, for her, a daily struggle. While I knew how most of this piece would go, writing it brought me to the discovery, at the end, of just how damn tired she is. It’s tiring fighting for that much control constantly. It’s downright exhausting. I’ll take that discovery into future roleplay.

It wasn’t that she didn’t care. It was that she cared too much about too many things. Emotions weren’t a cool, trickling river with a few swells or fast rapids. They were a constant torrent in the back of her head. They were a rip tide, seemingly calm and still on the surface when violence, death, and lust dwelled just beneath her glassy-water aviator shades. Audi hated people – living and dead. Hated the noise. Hated what Raiders did to her ride. Loved what she saw in the pack mentality and the violence of the Raiders in front of her. Hated she was getting old. Hated to watch Blue Betty rust. Loved a man and hated that she loved him. Hated that mornings hurt, and her knees creaked. Loved the feel of the open road and the balmy breeze of summer on her face going up the 95. Loved the feel of blood on her face after she put another Raider in the ground. Reveled in the familiar kick back of her gun every time it coughed out another bullet. Hated the fact it eventually, always ran out of ammo.

There was nothing Audi Edison did without emotion. She couldn’t if she wanted to. Every feeling screamed over her and made her skin burn. Sometimes, she simply let herself drown in the tide. She let it take her away and then there was no thinking, there was only fighting. Or fucking. Or killing. She’d come to covered in blood or (as she learned the other week) filled with rad rods and agony. But she’d come to. She always came back. At least, so far.

In the quiet hours of the night when there was nothing to do but stew in the crawling of her own skin because she couldn’t drive, she couldn’t move, and things were too damn quiet for sanity, she considered how easy it would be to not come back. Just to let go, let the feelings win, and stop fighting. It meant she’d lose everything, but it wouldn’t matter then. Having DWR around helped. When her mind was screaming she simply had to roll over and grab her ex-husband to fuck, or pout at Reef for food, or growl at Hudson to go shooting with her. They were a happy distraction. But she’d be leaving them soon too, up for basic, to prove she could earn her place among them proper. And she hated it.

She hated having to prove anything to anyone. It pricked at that rage again. She wanted to scream at all of them how damn stupid it was and she couldn’t. So, she walked off before she pulled a gun on someone.

She went up to the tavern alone. Skin crawling, head screaming, she went to find the one other thing that had ever calmed the tide. Music. She hadn’t worshipped the Kings for a long damn time, but she grew up with the beat. When she could find a beat hard enough to drown out the rage in the back of her head, to calm her own heart to matching the music and just shut everything else off, then she could lose herself again. But not to the rage. To somewhere else. Body moving in space, head lost in music, breath matching the beat. Nothing hurt for a few minutes. She stalked her way into the tavern and up to the now-familiar bar.

“Damon, put on something with a good beat. Make it loud. Now.” She growled to the bartender, tossing down two AMD in a mix of tip and apology for the snapping. He didn’t ask, but a few minutes later the vinyl was playing something loud and pulsing. She lost time, stumbling through the bar towards the most secluded back corner. Lost in shadows, she started to move, nothing but a body lost in the beat. She let it all shut off, the music scream down the emotions until there was nothing but someone else’s words and rhythm in space. For five minutes, she danced. For five minutes, she was at peace.

Maybe the rage would win tomorrow but, for tonight, the beat took her, and it was enough.